Bring water, grits, and salt to a boil in a heavy saucepan with a lid. Stir in half-and-half and simmer until grits are thickened and tender, 15 to 20 minutes. Set aside and keep warm.
Sprinkle shrimp with salt and cayenne pepper. Set aside in a bowl.
Place andouille sausage slices in a large skillet over medium heat. Fry sausage until browned, 5 to 8 minutes. Remove skillet from heat.
Cook bacon or Tasso in a large skillet over medium-high heat, turning occasionally, until evenly browned, about 10 minutes. Retain drippings in skillet. Transfer slices to paper towels.
Cook and stir red, and yellow bell peppers, onion, and garlic in the bacon drippings until the onion is translucent, about 8 minutes. Remove to a plate.
In the same skillet deglaze with white wine and cook shrimp 2-3 minutes. until the shrimp becomes pink. Remove to another plate.
Melt butter in the same skillet over medium heat; to make a roux stirring for five minutes to incorporate.. Turn heat to low and cook, stirring constantly, until the mixture is light brown in color. Watch carefully, mixture burns easily.
Pour in chicken broth, Louisiana Hot Sauce, Worcestershire Sauce, cooking and stirring until the sauce thickens, a couple minutes. If you feel like it’s too thick you can add a little cream or milk.
Just before serving, mix sharp Cheddar cheese into grits until melted and grits are creamy and light yellow. Plate grits on the bottom, andouille sausage and veggies over that with gravy and shrimp topping it all off and garnish with green onions. 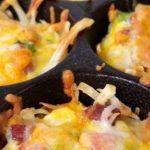 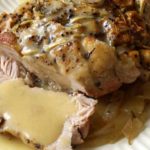 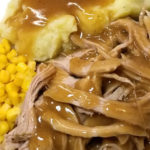 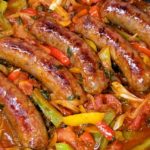 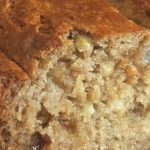